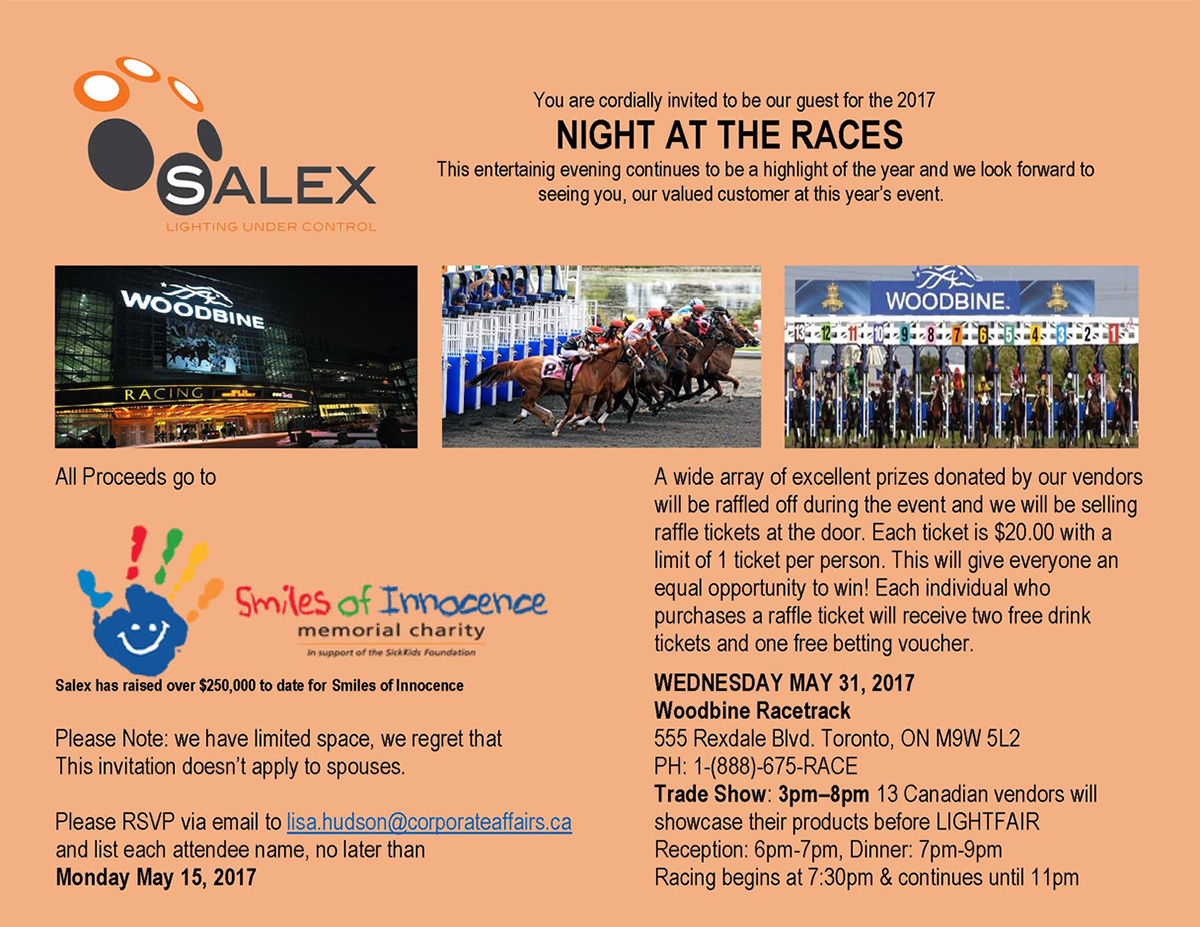 As southern Ontario’s largest lighting agency, Salex has been proudly supporting the Hospital for Sick Children through its exciting Night at the Races event for the past 12 years. An evening of fun, philanthropy and mingling with colleagues at Woodbine Racetrack, the annual fundraising event sees close to 200 attendees participate in the lighting specification industry, including architects, designers and engineers.

This year’s event, held on May 31, marked the 12th anniversary of Salex’s Night at the Races. The evening kicked off with a cocktail mix and mingle, before continuing on to dinner and horseracing. Guests purchased raffle tickets and participated in a live auction. Throughout the evening, Salex Partners

Nick Puopolo, Paul Hudson and George Katinas acted as MCs and guests had a chance to win one of many amazing prizes generously donated by Salex manufacturers. Also at the event the Partners introduced there 3 new senior associates, Andrew Parker, Ben Fischer, and Ross Sawin.

With more than 180 attendees, Night at the Races 2017 raised $11,000, with Salex and its Principals matching the funds to bring the grand total to an incredible $35,000. Working with Smiles of Innocence, the success of this year’s event will be used to purchase vital medical equipment for SickKids Hospital.

Salex has been an integral player in Canada’s architectural lighting community for more than 45 years. As a distributor and facilitator of commercial lighting installations and control systems, architects, engineers and designers turn to Salex for effective, efficient and sustainable lighting solutions. The company has worked on many award-winning projects, including the Four Seasons Hotel, Bridgepoint Health and Prince Arthur’s Landing in Thunder Bay. Salex received its most prestigious award this year, “The Illumination Award of Excellence”, for lighting up one of the 8th wonder of the word “ Niagara Falls “

Salex has been a generous supporter of the SickKids Foundation for over a decade, raising over $300,000 to-date for the Hospital for Sick Children. For more information, visit salex.ca or follow Salex on Twitter @SalexLUC.